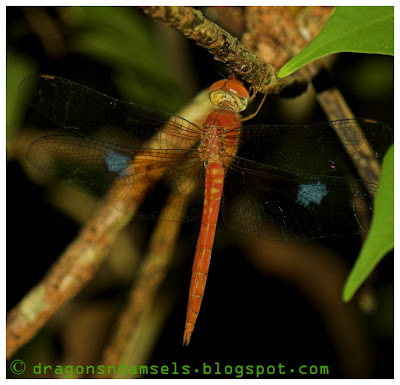 A male resting in the shade during the day photographed
on Pulau Sapi an island off Kota Kinabalu
This is another common crepuscular libellulid like the two Zyxomma ssp. (obtusum & petiolatum) and are found in similar habitats, i.e. drains, weedy ponds and other open bodies of water. 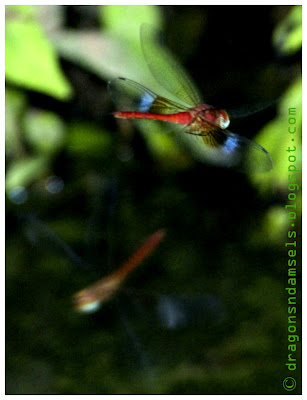 Two males in flight at dusk
It is active at dusk, flying to and fro along drains and across ponds, the males are quite conspicuous for the white wing patches. In flight they are rather frustrating to photograph! 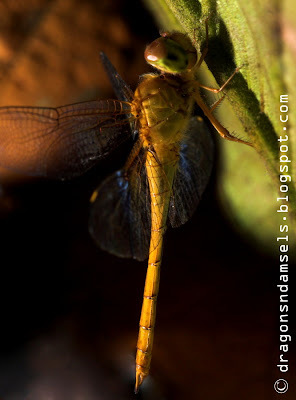 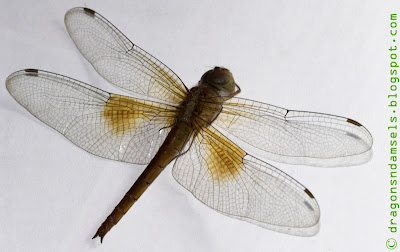 A female
The body of this medium-sized insect is orange-brown and the hindwing has an amber tinted patch followed by a patch of bluish white in the males while this white patch is absent in the female. Hence its common name - Coral-tailed Cloudwing.
Distribution: widespread in tropical Asia, Africa and Australasia.
Posted by Dragonchaser at 21:15

Thanks for this posting. Never seen any dragonflies like this. It does remind me of our Spot-winged Glider when you mentions it is hard to photograph on the wing.

Now that's a familier dragonfly.
I still need to get a mind-filling shot of it.

Is this a similar dragonfly? Can you ID it...