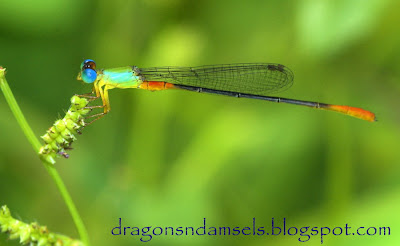 Compared to the species in my previous post Ceriagrion cerinorubellum is widespread in tropical Asia but is no less beautiful, with its bluish green head and orange base and tip of the abdomen it is quite distinctive and cannot be mistaken for other species. The female is similarly coloured but darker. In India it is commonly known as the Orange-tailed Marsh Dart.
I have frequently found it in drains, ponds, and open swamps and sometimes in gardens near town.
Posted by Dragonchaser at 17:15 4 comments: 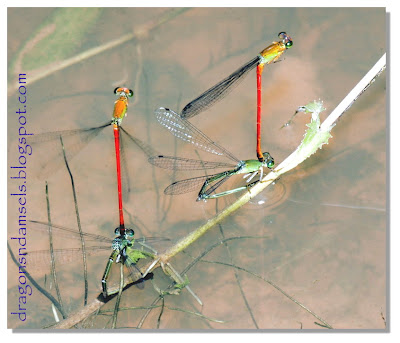 Members of the genus Ceriagrion are indeed some of the most beautiful damselflies, they come in shades of red, green and yellow. Back in 2005 when I just started to photograph and learn about Odonata I found some mating and ovipositing pairs of C. bellona along a small stream in hill country on the forest edge in Tambunan. The thorax of the males are orange and greenish with bright red abdomens while the females are mainly olive green. Males look quite similar to C. cerinorubellum which is the commoner of the two Ceriagrion species found in Borneo.

C. bellona is restricted to north Borneo and is recorded at 1000m on Mount Kinabalu as well as in the lowlands at Danum Valley.