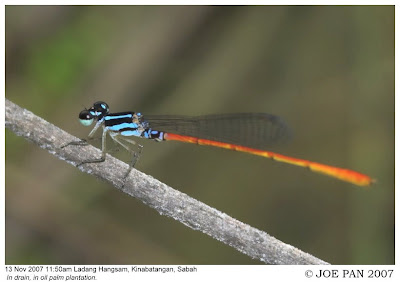 Photo 1: A young male (this species goes through
a series of colour change as it matures,
young specimens have largely red abdomens)
I found this delightful little damselfly to be quite common in shaded drains and in weeds among the palms in the plantation I where work.
Dr Rory Dow who is in the process of re-describing this species (and transfering it to this genus from Mortonagrion) identified my photos and said it was an endemic species in Borneo and my photographs are probably the only ones of this species in existance! He added "It appears to be quite widely distributed along the east coast of Borneo, but there is an apparently isolated population in Brunei." 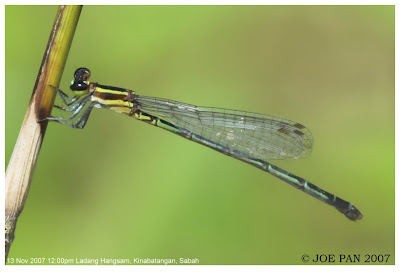 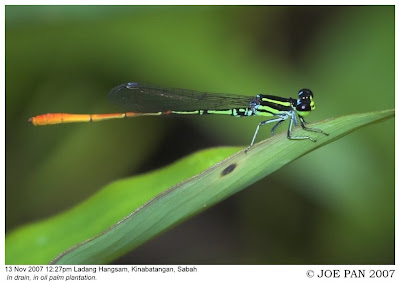 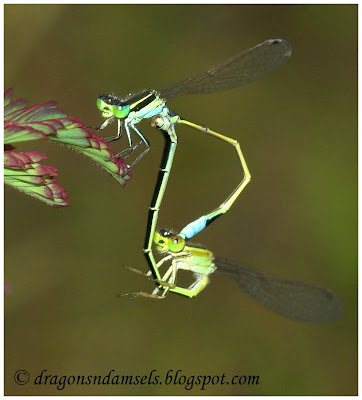 Photo 1: A pair in the wheel
The Common Bluetail, also known as the Ubiquitous Bluetail is a very widespread damselfly found from Africa, the Middle East  and throughout Southern and Eastern Asia. 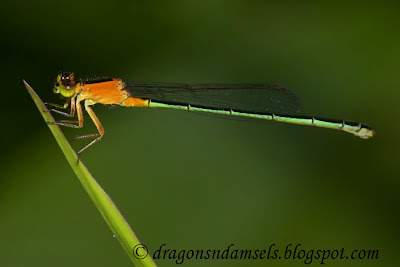 Photo 2: An orange form female
It is very common in open drains, ponds and swamps but not found in shaded areas and forest. The male is pale green on the sides of its thorax with black markings and a blue-tipped abdomen. Females, however appear in three colour forms, in one form it's similar to the male, then there's an olive green form and a golden orange form (which gives the species another common name - Senegal Golden Dartlet). All these female forms appear to be just as common as the other and can all be encountered at the same location at the same time. 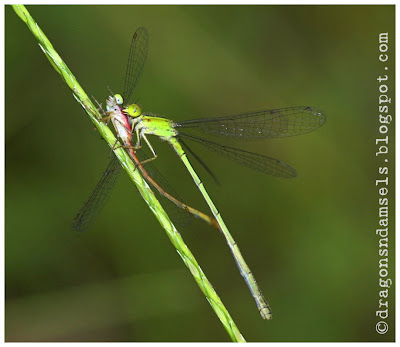 Photo 3: An olive-green female devouring a Agriocnemis femina
Posted by Dragonchaser at 19:38 No comments: