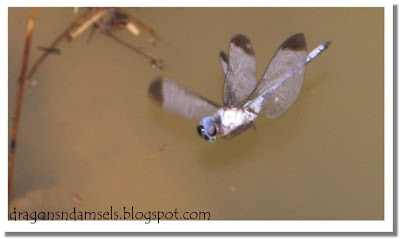 Crepuscular is a term used to describe animals that are primarily active during the twilight - at dawn and at dusk. This species is one of the few dragonflies in this family with this habit. The male Zyxomma obtusum is almost entirely white in colour (except for the dark tips of its wings) and as it suddenly appears in the dim light at dusk (or at dawn) over a pond it looks almost ghostly! Photographing it is a challenge for me and I need lots of luck - I simply focus on where I expect it to fly pass and shoot my flash gun at it, I get maybe one acceptable image out of every 20 shots!

Unlike the male the female is brown in colour with bright green eyes, I had photographed it once with the male though the image was too fuzzy to display.

The range of this species is said to be Indonesia, Japan, Philippines and of course also here in Malaysian Borneo.