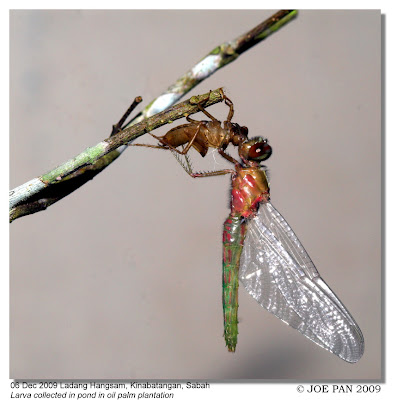 For the first time I was able to rear a dragonfly larva up to emergence. However unfortunately although I guessed the day of emergence, I was too late to catch the start of the emergence process.On the morning of the larva's change to adulthood I woke up at 3:15 a.m. but found that it had already fully emerged! I was only able to take photos of it hanging fully extended from the exuvia.

This, after 2 months of guessing and wondering about its species, turned out to be Rhodothemis rufa a common species in Asia - with a range from Bangladesh through India, Indochina, China, Malaysia, Indonesia and the Philippines. My thanks to Dr Rory Dow and Dr Sadayuki Ugai for the sp. identification.

The male however is rather difficult to distinguish from other common and very similar red libellulids. However the female (shown here) is recognized by its brownish colour and the mid-dorsal light yellow streak which run from the top of the antefrons through the thorax down to segment 5 of the abdomen. Unfortunately I don't have a photo of a male. 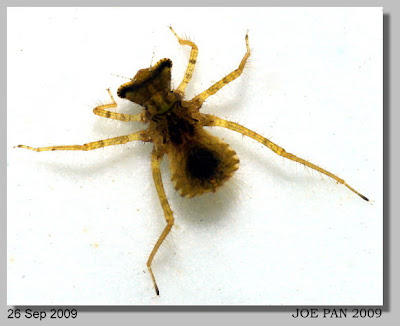 The larva when I first collected it was a rather long-legged spiderlike creature! 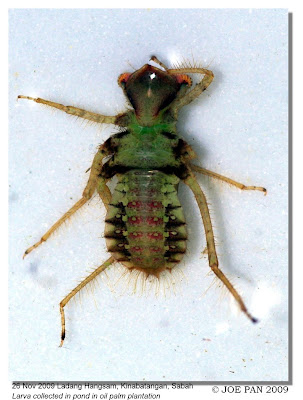 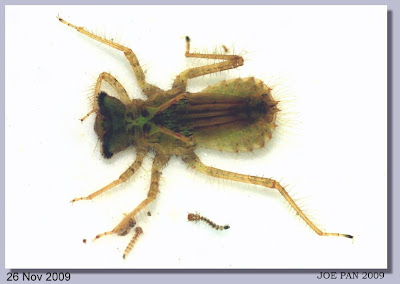 Mature larva with mosquito larvae which I provided it. It also readily ate small tadpoles. 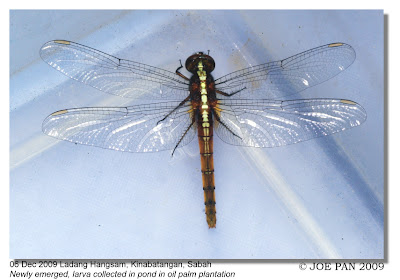 The newly emerged female with its characteristic mid-dorsal line.