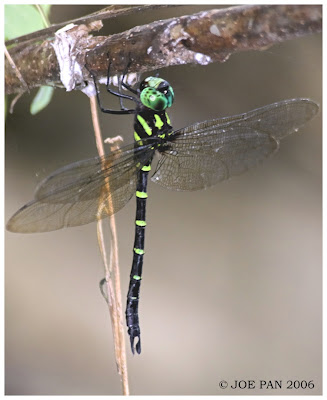 Male resting beside pond
Members of the family Aeshnidae are the gaints of the Odonata and this is one of the largest of the gaints. This is the second time that I've seen and photographed this species at the very same pond at the edge of a forest reserve near Lahad Datu town. The first time was in 2006 when I saw a male resting on vegetation at the side of the pond, and today I was fortunate enough to see this huge female ovipositing at this pond. Interestingly she was laying her eggs in the moist soil just above the water. This species is also known to lay its eggs in water-filled tree holes and on buttress cavities of large trees. 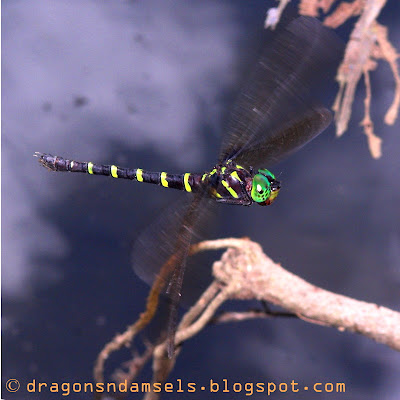 Female on the wing
Females of I. grubaueri have hindwings that measure up to 68mm while males are thinner and smaller with 59-62mm long hindwings. Both sexes are similarly coloured with bright lime-green markings on the thorax and wide bands on the abdomen. 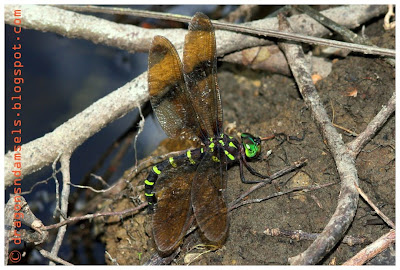 Female ovipositing on wet soil above water line
This species is said to be widespread in lowland forest in Sundaland and the Philippines.
Posted by Dragonchaser at 18:25 11 comments: 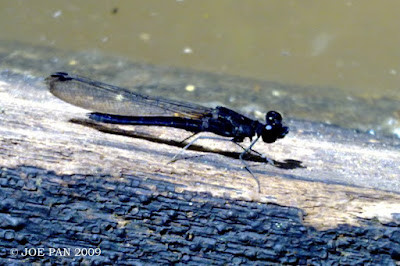 This is the other Libellago sp. which I was able to photograph with my Nokia mobile phone in the Binusan Forest Reserve in Nunukan, Kalimantan Timur, Indonesia during my short visit there last week. Dr Rory Dow said my photos "almost certainly" showed Libellago hyalina. 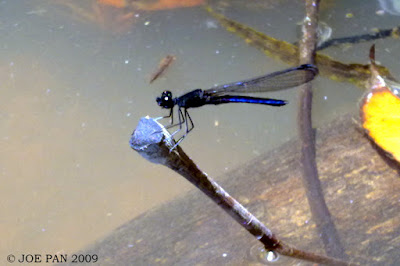 L. hyalina has a wider range than the sp. in my previous post, being found from parts of China, Thailand, down to Peninsular Malaysia, Borneo and other parts of Indonesia.
My photos show the mature male which has a dark blue/purple abdomen (apparent only when seen in bright sunlight). Immature males have red markings on the abdomen, while the females like those of other spp. in this genus are rather darb in colour.
Posted by Dragonchaser at 22:46 No comments: 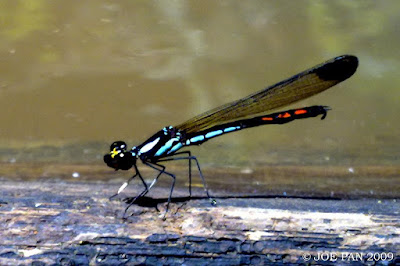 Last week I took the short ferry ride from Tawau, Sabah across the border to Nunukan in East Kalimantan, Indonesia. There, friends took me to a picnic area in a forest reserve near town but unfortunately I had not brought along my DSLR camera, because I found some very interesting damselfly species which were new to me! Two of them were Libellago spp. of which, after much patience, I was able to take some fairly sharp photos with my Nokia N85 mobile phone camera! 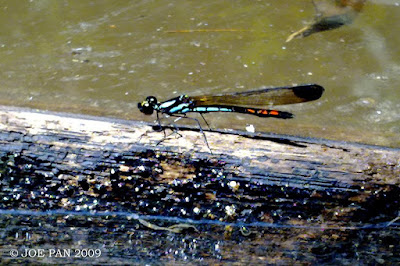 L. phaethon is said to be known only from northeast Borneo (just south of Tawau, Nunukan Island would be in this area) being more well known from small streams in Danum in Sabah.
The male is uniquely coloured blue (on thorax and basal half of abdomen) and red markings on the rest of the abdomen. The female (which I did not see) like those of the other species in the genus is darb in colour and difficult to identify unless when associated with the males.
I observed typical Libellago male agression behaviour among the males - two males would hover above a piece of territory facing each other until one of them retreats. I also saw this species confront males of L. hyalina  which was also quite common here in this manner.
Posted by Dragonchaser at 21:30 2 comments: