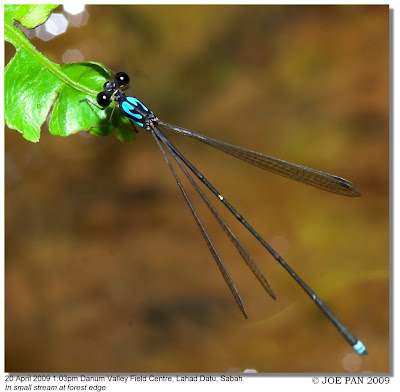 I found several males of these small damselflies with conspicious blue markings on the upperside of the thorax resting on low vegetation along a small streamlet on the forest edge in the Danum Valley Field Centre. Unlike most damselflies they were extremely unafraid and I could easily pick them up with my hand. (Unfortunately I did not see any females). 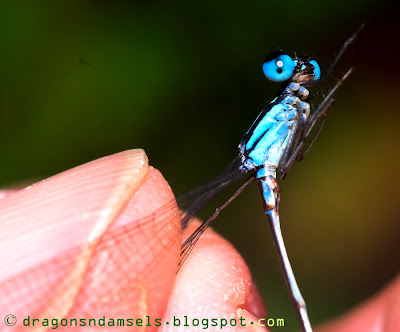 On checking Dr A G Orr's Dragonflies of Borneo later I found my photos matched that of Coeliccia nigrohamata. I was however informed that members in this group of Coeliccia were currently under reclassification and this could very well be classified as a different species! 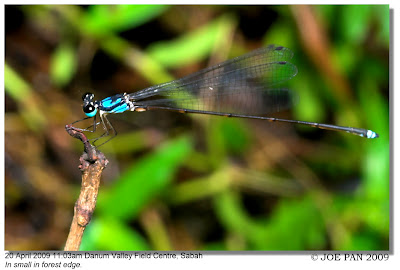 Coeliccia spp. are found in forested habitats, inhabiting fresh water marshes, streams and springs. They are not usually found in open country or big rivers. This particular species belongs to a group of blue-marked species in the genus, another group consists of mainly species with yellow markings. A species found in Peninsular Malaysia, C. octogesima has a famous blue telephone-shaped logo on the synthorax (see Dr Choong's blog).
Coeliccia nigrohamata  has been recorded from Brunei and Sabah.
Posted by Dragonchaser at 19:10

nigrohamata is a common Coeliccia species throughout the Borneo Island. I was in Lanjak-Entimau (Sarawak) last year, and I found plenty of them there.