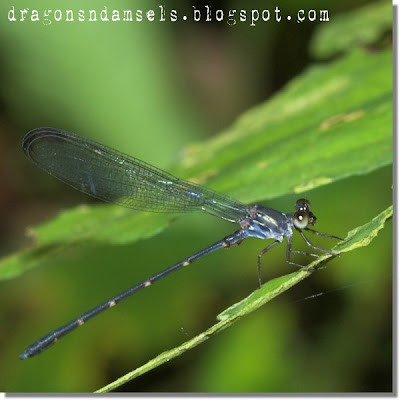 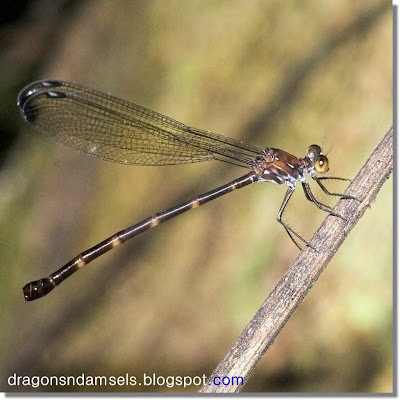 Devadatta podolestoides is the only representative of this so-called primitive family of damselfly in Borneo. Their bodies are darb brown to bluish in colour with yellowish bands on the abdomen. They are found mainly in rocky forest stream in the thick undergrowth. I have found them in Poring, Ranau and at the Kiansom Waterfalls near Kota Kinabalu.

The distribution range of species is China, Peninsular Malaysia, Borneo, other parts of Indonesia and the Philippines.
Posted by Dragonchaser at 21:28 1 comment:

Zygoptera
Species Name: Libellago lineata
Family: Chlorocyphidae
I have not seen this species in Borneo yet but as I have just taken some photos of this pretty damselfly in Kelantan (Peninsular Malaysia) I decide to feature it in this post. 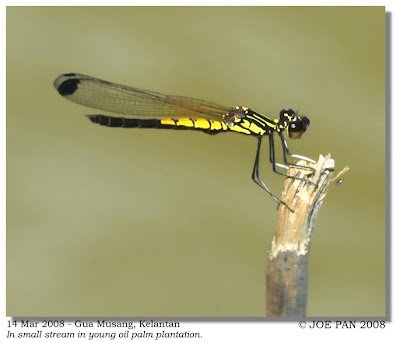 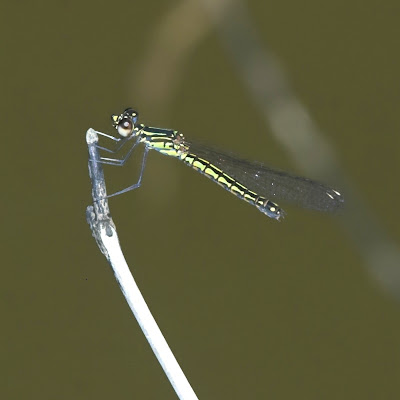 This species is described as common in lowlands streams and rivers and widespread throughout Asia - from China, Taiwan, India, and throughout Southeast Asia.

The male is beautifully marked with yellow-orange and black with white-stockinged legs which it displays during its courtship dance. The female is of a paler and more greenish colour.

I found them in a fast flowing stream in a young oil palm plantation near Gua Musang in Kelantan.
Posted by Dragonchaser at 21:58 3 comments: 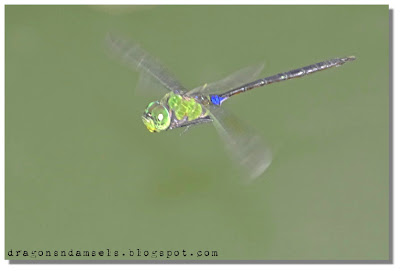 Anax guttatus is heavy-bodied and an unmistakable common dragonfly of open habitats that is often seen in drains, ponds and swamps. The eyes, thorax and the base of the abdomen are mainly green in colour while the 2nd and 3rd abdominal sections are bright blue and the rest of the abdomen being dark brown with lighter spots. Both sexes are similarly marked. The males are often seen "patrolling" back and fro ceaselessly along big drains and over ponds almost the whole day long and well into the early evening. 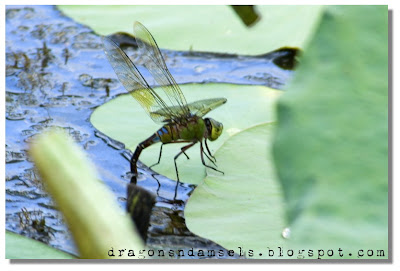 The female can sometimes be seen ovipositing while clinging to floating vegetation or twigs (this one in my photo was sitting on waterlily pads) and is quite fearless when doing so, which could be quite dangerous at times as she can be quite vulnerable to predators. In fact I had seen one being attacked by a green paddy frog.

This species commonly called the Lesser Green Emperor has a very wide distribution range - from Japan, China, all of Southeast Asia to Micronesia. It is also found in Africa.
Posted by Dragonchaser at 21:07 2 comments: