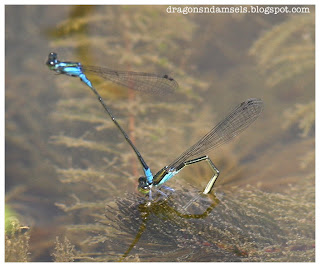 This is another species of blue-coloured damselflies that are common in drains, lily ponds and stagnant bodies of water. They resemble Pseudagrion microcephalum but are smaller and both these species often share the same ponds. As with the latter species the male remained paired with the female while she lays her eggs onto water weeds and many pairs can be seen ovipositing en masse. 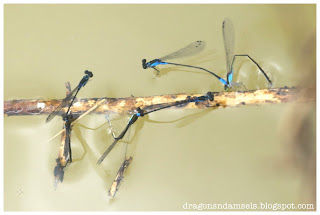 The male is blue on the sides of its thorax and black dorsally with two blue spots just behind the head, the abdomen is black tipped with blue. Females are similarly marked but dark olive instead of black as in the male. this dark area also lack blue spots.