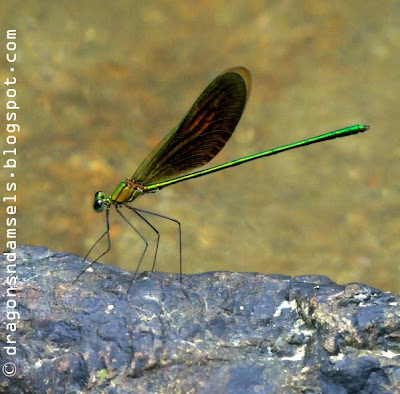 Male on rock in midstream (taken without flash)
This  surely has to be the most beautiful damselfly in Borneo! Witnessing it in nature is one of the most breathtaking experiences for me. My photos hardly convey the true beauty of this creature that has simply to be seen in life.  I had previously only glimpsed it momentarily on a few ocassions in forested rivers and had never had a chance to photograph it until now. 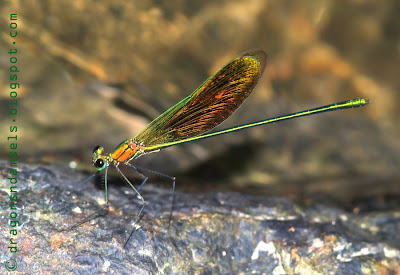 Close-up of male (taken with flash)
I saw this spectacular male in the shallow rocky Sungai Palum Tambun which is a tributary of the mighty Segama River in the Danum Valley Field Centre. It was tirelessly flitting from rock to rock in the late afternoon, occassionally I also saw his less colourful mate, but she was too shy to pause and pose for me! It had me chasing it from rock to rock trying to get a good picture and mercifully, just as I was about to become totally exhausted and before the sun disappeared, it stayed put for a while and let me approach it to get my photo!
The body of both sexes are bright metallic green in colour, the top of the male's hindwings are brilliantly iridescent  green and its forewings are clear with a yellow-brown tint while the both the female's wings are clear with a lighter yellow-brown tint.
Members of the family Calopterygidae (from the Greek words meaning beautiful wings) are slender with long thin legs and mainly coloured metallic green. N. longipes is found in Borneo as well as in Peninsular Malaysia where another similar and slightly bigger species N. chinensis is also found.
Posted by Dragonchaser at 23:35

I agree, its a stunning damselfly, similar to demoiselles in the UK. Great images.

Very stunning. Looks like a cross between our Ebony Jewelwing and Sparkling Jewelwing, both are breathtaking.