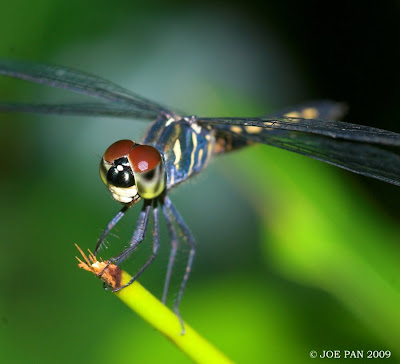 Female
Last week on a short visit to the Borneo Paradise Eco-resort near Lahad Datu, Sabah I saw and photographed a small female libellulid on the mangrove edge which I had never seen before. When Rory Dow saw the photo which I emailed to him he said it looked like the female of Raphismia bispina a mangrove specialist. On checking the books and on the Net I found out that the male is a small blue fellow that resembles Brachydiplax chalybea, and I suddenly recalled seeing what I thought was a very skittish B. chalybea at the same place. 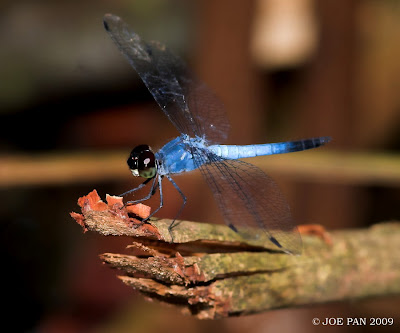 Male guarding a pond
Well, today I went to look for this male and found quite a few of them in the mangrove forest at the resort. Almost every small tidal pond (of salt water) has at least one male guarding it. And I also saw a female ovispositing in one of the ponds jealously guarded by the resident male. 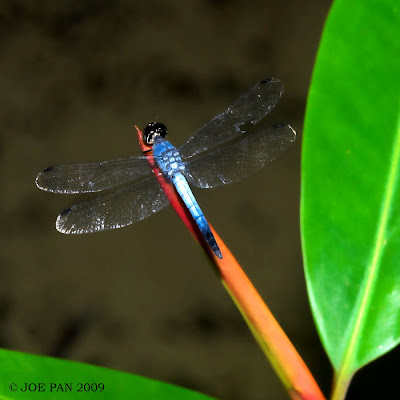 Male perched on mangrove seedling
At first glance the males look like B. chalybea except that they are a bit smaller and the shade of blue is slightly different. But unlike the latter they are very skittish flying away at the slightest movement and landing further away. It took me quite some time and very patient stalking to get my first satisfactory shot.
I also tried to take some photos of their underside (upskirt photos!!) to try to show the signatory twin spines on their thorax behind the hind legs and the process projecting beneath on segment 2 of the abdomen. See if you can spot these on the photos. 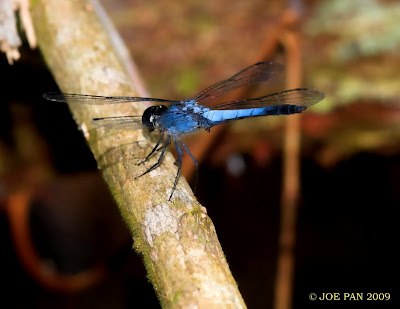 Male, the process on abdominal segment 2 is clearly
visible, but the pair of spines behind legs are less so
Posted by Dragonchaser at 20:01

Thanks for this article, I really enjoyed seeing the photos of dragonflies somewhat like ours. In fact I just did a post on one you might see as a close relative to the one posted second in this article see http://rlephoto.blogspot.com/2009/03/common-garden-dragonfly.html

Wow, you have got R. bispina! I tried to look for it when I travelled to some part of mangroves on the way to Swiss Garden Damai Laut Hotel, Lumut (Perak), and I was in vain :(

Wonderful post, and of course, fantastic captures, Joe! We're beginning to warm up here...and I'm anxious to see my first dragon of the season!

Great images - I can't wait for the dragonfly season to be with us in the UK once again.
Cheers
Matt