Pantala flavescens is certainly the world’s most widely distributed dragonfly – found worldwide in the tropics as well as in temperate zones of North America and . It’s the only odonate that Borneo shares with the where it is found as a rare vagrant. For this reason, and because it had even been known to land on ships far out at sea, its common name is the Globe Skimmer or Wandering Glider.

The colour of the thorax and abdomen of both sexes is orangish to light brown with clear wings, the small dark area on the tip of the hindwing is distinctive. They can be seen flying almost anywhere in open country, sometimes in great numbers, they rarely perch. They breed in standing or slow moving water, so rice paddies in the tropics are particularly suitable habitats. 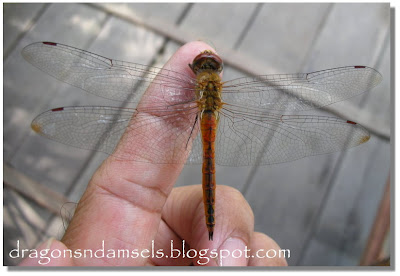 Male Globe Skimmer on my finger

As these insects are almost perpetually on the wing, I have not been able to take a good photo of them in nature. I was however lucky to find one on the ground – which I picked up and photographed perched on my finger.

They've been known to land on ships out in sea?! Wow...the name aptly applies! That had to have been an awesome feeling when your dragon just perched on your finger, especially it being a glider!

Thanks for your comment, Spooky. I found this dragon on the ground injured I think but still alive. So sadly it wasn't going to glide no more...
Cheers.

I was fortunate to capture several perched sometime ago. I also was able to take a decent flight shot. You are right it is not the most easiest dragon to shoot.