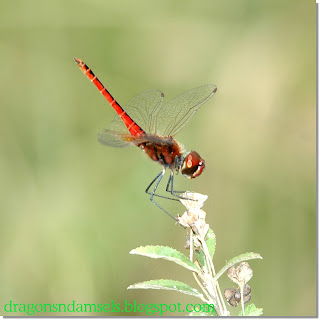 I first photographed a single male of this species in August 2005 in an oil palm plantation repeatedly flying from and landing on short weeds (Top Photo). As this species was mentioned as unrecorded from Borneo in publications I was not sure about its identity until Rory Dow confirmed that this is M. cora when I emailed him a photo. I have since found a breeding population at a reclaimed area in the sea front in Lahad Datu town, therefore proving that they are definitely present in Borneo too.
M. cora is a medium-sized red-orange dragonfly, the sexes are similar except that the females are more orange than red. They breed in open coastal areas and in brackish, or saltish water bodies.

(Centre photo: A pair in tandem) 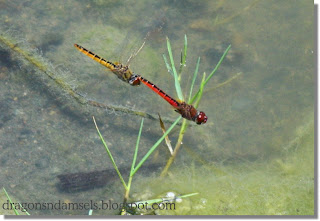 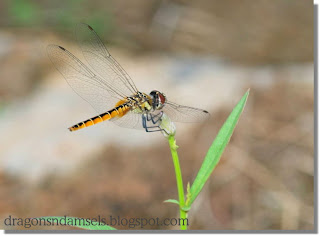 I too was the first to photograph this in Sri Lanka! It is one of the two Libelluids that are missing in the 'Photo Guide' to Sri Lankan dragonflies. Nice to see how the female looks like as I haven't come across it yet.