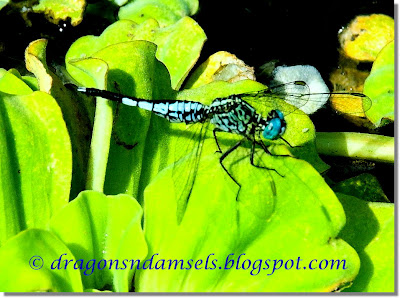 Male
At first glance this small species looks like Diplacodes travialis even the males and females in both species are similarly coloured blue and pale greenish yellow respectly. However look closer and you'll see that their abdomens look "pregnant", bulging at the base and thin at the tail end. This unique shape gives it the common name the Pintail.
Female 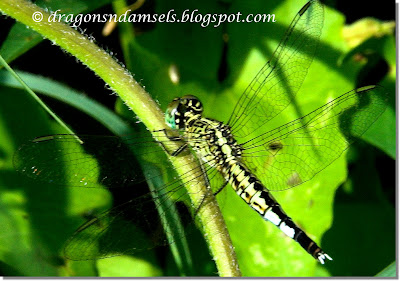 Acisoma panorpoides is a very widespread Libellulid being recorded
from South Africa and Madagascar to the Mediterranean, into
mainland Asia and Southeast Asia.
Previously thought to be absent from the northern part Borneo, I had
photographed it in Lahad Datu, Sabah as well as Tuaran, near Kota
Kinabalu where I found it to be very common near paddy fields.
Posted by Dragonchaser at 22:20

Beautiful captures! I believe you many more species in your country than in mine!

How inappropriate it is to be called "Asian Pintail" given its global range which is the vernacular given in our Dragonfly Photo Guide here in Sri Lanka.
Do you have a Guide to dragonflies in Borneo? I found you great blog through the spookydragonfly's blog. I am going to add a link to you and promise to be back!

Hi gallicissa,
Thanks for dropping by.
Yes we do have a good book on Bornean odonata " Dragonflies of Borneo" written by A. G. Orr.
Regards. Joe