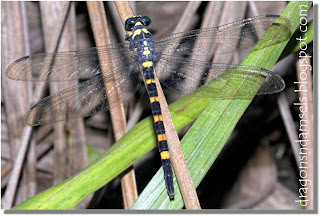 As its genus name implies this is a large dragonfly with a wingspan of 100-110mm. Although said to be widespread in Borneo frequenting shallow streams in dense forest, I have only seen it once... in fact literally almost bumping into it before I saw it! Fortunately for me it did not fly away until after I was able to take some photographs of it. The similarly coloured female is said to lay her eggs in the mud on the weedy edge of shallow water without the benefit of a male guard.

The range of M. quadratus is recorded as China, Peninsular Malaysia, Borneo and Indonesia.
Posted by Dragonchaser at 19:57

Spotted your blog on Odonata of Borneo. It is an excellent blog. I'm also blogging on Odonata.... but for the Odonata of Peninsular Malaysia.