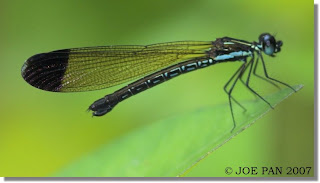 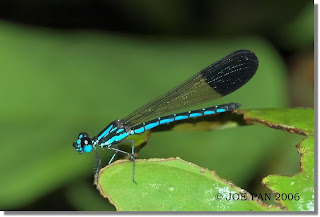 In the cool forested streams in the hills where we love to enjoy our picnics and a dip in the clear water there is a whole new set of damselflies and dragonflies that are not found in the hot open places. Many of the damselflies found here are beautifully coloured, with magnificent metallic blue, green and black and other really cool colours. Look closely in the small bushes on the river banks and on the rocks and debris in the water itself. You will surely find some really interesting odonates.

Rhinocypha humeralis is one of the blue-coloured species, the males is painted in bright sky blue on black from his "face"and eyes to the tip of his abdomen, the basal two-thirds of both his wing are clear while the remaining third tip is black. His mate is less brightly hued and looks a little faded compared to the male, her wings are similarly coloured but the black tip is smaller than that of the male.
Posted by Dragonchaser at 18:12