This is another common species that is readily recognizable because of its beautiful markings in the base of its hindwings. They are usually found flying, fluttering a little like butterflies do, to and fro in large numbers on open spaces catching small insects. However, they can sometimes be seen perched singly on plants near ponds and drains where they breed.

It is another widespread species, ranging all across Asia from India, China, Japan to SE Asia down to Australia. One of their common English names is Yellow-striped Flutterer. Both male and female are similarly marked.

I find its markings rather nice and use it to make this design: 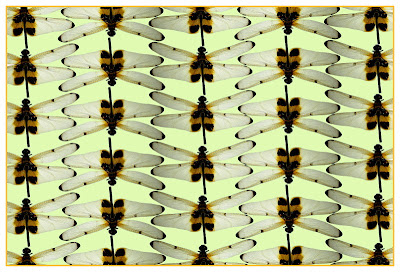